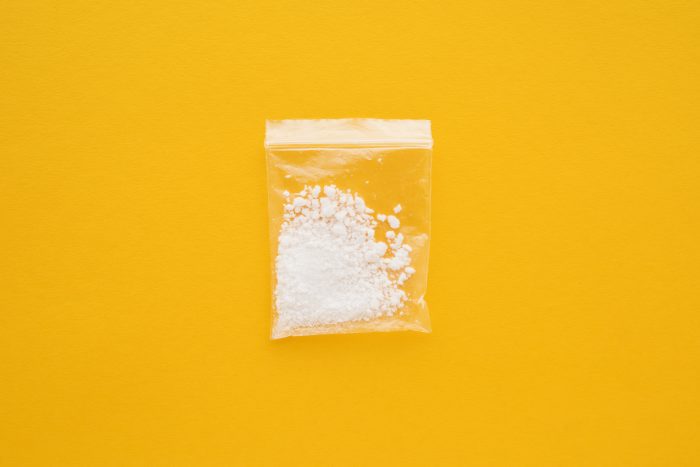 Methamphetamine (meth) is a highly addictive stimulant drug. This drug creates a sensation of being high while also creating intense bursts of energy and anxiety. It is similar to amphetamine, a drug prescribed to treat sleep disorders like narcolepsy and ADHD. Methamphetamine is dangerous for both its short- and long-term risks.

Methamphetamine is often called ice, crystal, blue, or speed. Crystal meth looks like glass or bluish-colored rocks. Most often, people smoke meth, but they may also snort or inject it. They may also take it as a pill.

One of the biggest problems with meth is how much of it is required to maintain a high. From the start to the come down, a meth high lasts only a matter of minutes. As a result, many people binge-use it, using multiple doses in a short timeframe and then crashing after each dose. Other times, people “run,” which means they will continue to use the drug every few hours for several days at a time, often without sleeping or eating during most of that time.

What Happens When a Person Uses Methamphetamine?

Meth affects the function of the central nervous system. It increases the production of dopamine, a natural feel-good chemical. Dopamine helps with motivation and movement. It also helps to reinforce pleasurable experiences. By increasing the amount of dopamine in the brain quickly, meth reinforces this drug-seeking behavior. This can create addiction and dependency quickly.

There are risks to taking meth. In the short term, it may cause:

Initially, these symptoms wear off. However, meth also can create long-term negative consequences when used on a consistent basis. Long-term abuse of the drug can lead to addiction, which includes drug-seeking behavior and a functional change in the brain, as noted by the National Institute on Drug Abuse.

Some of these events can create a mental break, putting a person at risk for aggressive and reckless behavior as well as psychosis.

Additionally, meth changes the dopamine system in the brain so much so that it can lead to impaired verbal learning, cognitive function decline, and reduced coordination. The areas of the brain that deal with emotion and memory often suffer damage, which makes it hard for a person to feel pleasure any longer.

In addition to all of this, meth creates dependence. A person is dependent on the drug when they cannot stop using it on their own. They may feel intense withdrawal symptoms when they try to stop. It can be nearly impossible to manage cravings, so even when a person desires to stop using, they cannot do so without professional help. In some situations, they may experience physical and emotional withdrawal symptoms that can be life-threatening. That’s why a professional detox center tends to be best for people using meth, especially over the long term.

The Risk of Overdose Is High

Methamphetamine overdose is a real factor every time a person uses the drug. Overdoses occur when a person uses so much of the drug that it slows down the function of the brain. The toxicity level in the body can lead to a heart attack, impaired breathing, and coma. Often, the symptoms of meth overdose are the same as those related to opioid overdose.

If an overdose occurs, it will be critical to restore blood flow through the body as an emergency method. That includes restoring the function of the heart and getting blood to the brain. Many times, meth overdose causes a stroke, heart attack, or other organ failure that may not be easily treated as it can be with opioids.

Meth Addiction Treatment Can Be Effective

If you or a loved one is battling meth addiction, drug addiction treatment is critical to protecting their life. Without comprehensive support, this is a progressive disease. Treatment may include:

Many people need months of therapy to recover from meth addiction. View this condition as a life-threatening disease. Keep in mind that many people with meth addiction benefit from early intervention. If your son or daughter, spouse, or other family member is struggling with meth use, even if dependence has not formed, immediate treatment can be helpful. Often, a person using meth is not likely to ask for help themselves, especially if their condition has progressed. That doesn’t mean they don’t want help, though. They need support getting there.

At The Ranch at Dove Tree, our team works closely with you to ensure the best possible outcome. That includes providing a comprehensive treatment plan that addresses both the physical and mental health needs you have. Reach out to us today to learn more about getting help immediately.

To learn more about our programs at Ranch at Dove Tree, Texas addiction rehab with medical detox, please contact us today at 800.218.6727.