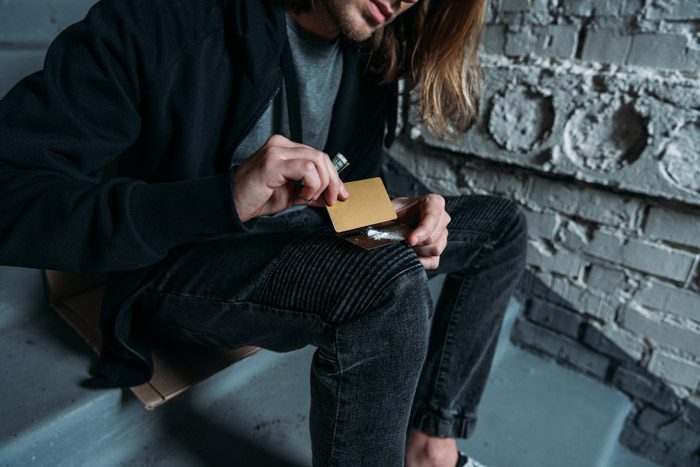 Cocaine is a dangerous stimulant drug. This illicit substance can create intense highs with a euphoric feeling, as well as drastic lows. Cocaine is highly addictive and very deadly, with over 16,000 people dying from cocaine use or overdose in the U.S. in 2019, according to the National Institute on Drug Abuse.

Cocaine comes from the coca plant that’s native to South America. Most of the time, it looks like a white, fine powder much like flour. In the U.S., cocaine is illegal to use in any form. In other areas, it is used as a type of anesthesia in surgical procedures.

Some dealers mix it with other substances, such as cornstarch, to dilute its effect. Other times, it is mixed with other drugs, such as amphetamine to increase its potency. Because these combinations can change rapidly, people are susceptible to different experiences and overdose risks with each use.

Most of the time, people snort cocaine into the nose. It can also be rubbed into the gums or made into a syrup that is injected into a vein. The effects of cocaine wear off quickly. That’s why many people use it repeatedly within a short time. This only increases the risk of overdose.

What Happens to the Brain When Using Cocaine?

Using cocaine in any form affects the brain. It increases dopamine, a chemical messenger that impacts the reward center. Cocaine prevents dopamine from being recycled back into the cells that release it. The excess of dopamine in the system decreases communication between nerve cells and causes a sense of euphoria, or a high. That “high” triggers the brain to want more of the drug, thus reinforcing drug-taking behaviors. Over time, the cells become less sensitive to cocaine, leading the user to take to stronger doses, to use the drug more frequently, or to combine it with other drugs to get the desired effect.

The use of cocaine can cause:

As a stimulant, cocaine may help people feel as though they can do anything. It can also lead to unpredictable and, in some situations, violent behavior. Most often, the high wears off within a few minutes to an hour.

What Are the Health Consequences of Using Cocaine?

Whether used one time or over the long term, cocaine creates negative consequences. One dose can cause an overdose, a life-threatening emergency situation where the body begins to shut down. Other times, it creates short-term effects such as:

Over the long term, the health effects may include:

How Cocaine Use Becomes Addiction

The repeated use of cocaine creates a change in the way the brain functions. The brain, which is programmed to seek out rewarding, pleasurable experiences, begins to recognize cocaine use as one of those reward mechanisms. As a result, the brain begins to crave it.

Dependence occurs when the body and brain become reliant on the drug to function. This is often notable in the presence of withdrawal symptoms. For cocaine, these may include extreme fatigue, depression, and increased appetite. Some people also have trouble thinking or concentrating. Physical pain in the joints, bones, and muscles may occur. Agitation and mood swings can also occur.

A second component of addiction is psychological dependence in the form of intense cravings when a person cannot access the drug. These cravings are so significant it is unlikely a person will be able to avoid continued use even if they want to stop.

Treatment for Cocaine Addiction Can Be Successful

There are several components to treating cocaine addiction:

Many people with cocaine addiction need to detox from it. Drug detox allows the body to naturally remove the waste products and components of the drug from the system over a few days to weeks. A professional detox program uses medication and other treatments help minimize the withdrawal symptoms and cravings.

During the first few weeks to months after detox, a person may benefit from inpatient treatment programs. During this residential treatment, a person receives a great deal of support, including:

Over time, a person learns how to control their thoughts to minimize the risk of negative behaviors like drug use. They also learn about triggers, how to avoid stress, and how to maintain physical health.

Addiction to cocaine is a life-long battle. Ongoing outpatient treatment and community support groups can help a person to improve his or her outcome and maintain a drug-free lifestyle.
It takes work, but cocaine addiction treatment can be very effective. It can also improve the overall quality of life and physical health. The Ranch at Dove Tree offers a comprehensive treatment program in Lubbock, Texas that can help today.

Looking for Lubbock addiction treatment with detox? To learn more about our programs at Ranch at Dove Tree, please contact us today at 800.218.6727.