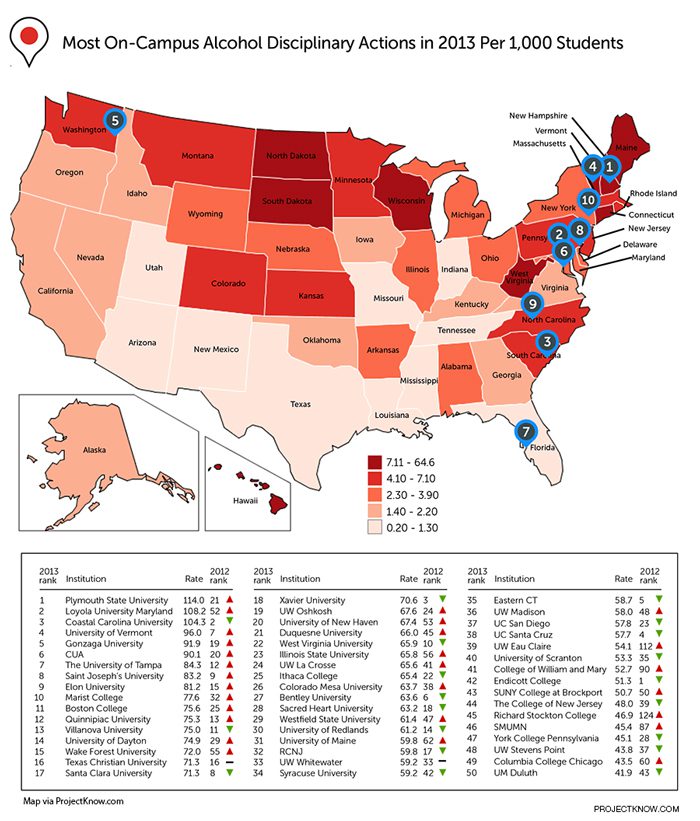 College drinking is no new phenomena.

What has changed in recent years is the rate of binge drinking and mixing alcohol and drugs, which has led to an enormous hike in the number of alcohol-related injuries and deaths among college students ages 18-24. The colleges and universities with the highest number of arrests may not necessarily be the schools with the highest rate of alcohol-related issues. Some schools have changed their reporting procedures for relevant data.

One example of how reporting procedures have changed over the past decade is at the University of Pennsylvania. According to Project Know, from 2013 to 2014, reported disciplinary actions at the University jumped from 21 to 337. The nearly 1500 percent increase was not due to a hike in offenders but to new reporting policies. On the other hand, the university that ranks number one for the most arrests in 2015 had zero arrests in 2014 and 115 arrests in 2013. They explained the “zero” was due to not using the correct definition of “arrest” that year. Some schools say part of the reason for the incline in alcohol-related arrests is not only due to the increased use of alcohol and drugs on campus, but also because the school aims to maintain student safety by keeping a police force on campus.

Keeping these anomalies in mind, here is a list of the colleges with the highest rate of alcohol arrests:

The states with the biggest increases in alcohol arrests on college campuses are as follows:

Colleges with the biggest increase in alcohol-related arrests:

To get a clearer picture of the grand scheme of alcohol arrests on college campuses across the nation, see the map below. Drug and alcohol problems affect more than just the person drinking or using. When discussing colleges with your child, it is a good idea to have open discussion about drinking and drug use and to make an educated decision as to where they will spend the next four years of their life. 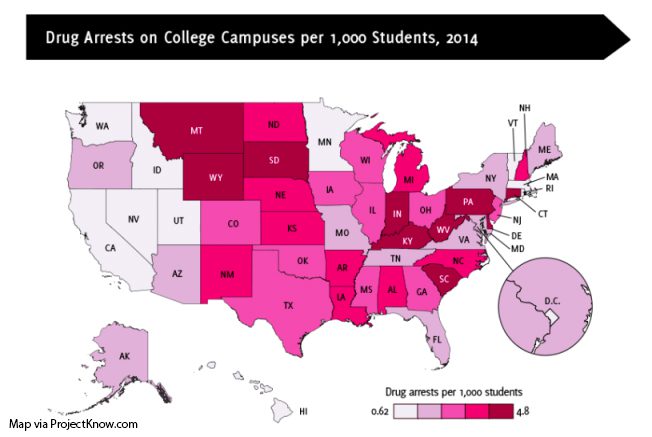 Contact Ranch at Dove Tree for more information on getting help for you or your loved one at 800.218.6727. All admissions calls are completely confidential.

Greenburg, M. (2015, February 3). See Which DC-Area Colleges Have the Most Trouble With Alcohol On Campus [Map].